Office Hours
Varies by location. Please see All DC DMV Locations under About DMV in the menu.

Gabriel Robinson
Director
-A +A 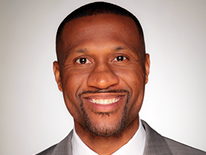 Gabriel Robinson is the Director of the DC Department of Motor Vehicles (DC DMV). In this position, Gabriel oversees the issuing of driver licenses and identification cards, registering and inspecting of vehicles, and providing hearings on tickets that have been contested, as well as collecting ticket payments. DC DMV directly interacts with an average of 3,000 customers daily, more than nearly any other District Government agency. Gabriel is not “new” to DC DMV. He began his District Government career more than 14 years ago with the agency and spent four of those years serving as its Associate Director. He was responsible for eight functions, including human resources, training, performance management and measurement, procurement, and communications, and service integrity. During his tenure with DC DMV, Gabriel had many accomplishments: assisting in the implementation of Central Issuance and rolling out a new credential with advanced security features, proposing and implementing a series of enhancements to the titling and registration system to protect the public’s sensitive information, and leading the overall modernization of DMV facilities through a partnership with the Department of General Services (DGS) to design, construct, and open four new service center locations.

Prior to his role as DC DMV’s Associate Director, Gabriel also served as the Integrity Officer. In that position, he implemented the agency’s facial recognition program, which directly resulted in identifying fraudulently issued credentials, provided the fraudulent document training, and investigated one of the largest internal driver license and identification fraud rings in the District of Columbia, which led to multiple prosecutions and convictions. Gabriel began his career at DC DMV as a Service Manager, where he reduced customer wait time and served as one of the primary change agents leading to critical system advancements in the way the agency does business.

In 2016, Gabriel joined the District of Columbia’s Department of Public Works (DPW) as its first Chief Operating Officer. At DPW, he implemented the Vehicles-on-Demand Program with a ride share company to transport District Government employees for official business. The program is on track to help the District with its sustainability goals by helping with the reduction sedans in the government’s fleet. Gabriel also had an integral role in the successful execution of audit recommendations made after the Snow Blizzard of 2016, the second largest single snow event in the District of Columbia. Additionally, Gabriel managed the creation and launch of MyDPW DC, the agency’s digital app that informs residents about leaf collection, booting and towing, and street sweeping.

Gabriel is a collaborative leader who has proven experience as a change agent and has learned the most important part of success for any organization is its people. He has been recognized for his extraordinary leadership and service by the Mayor’s Office, the former Director of the Federal Bureau of Investigations, the U.S. Marshalls, and Alpha Phi Alpha Fraternity, Inc. He credits much of his personal and professional achievements to the strong and long-lasting partnerships he has maintained with the members on his team and those he serves.

Gabriel completed a double major at Florida State University, where he earned his Bachelor of Science in Business Management and Human Resources.